This group once performed at CW tv 6 (Kearny Mesa). Pinoy Pride celebration in Las Vegas for 3 years. A regular performer at Hard Rock  Café (down town,San Diego) and regular too at Wingstop (Chula Vista). They have performed in a various community festivals, wedding party ,birthday party and Christmas party as far as LA.  Pls. check on our Facebook page.

The name of “Naruwan Taiko” stems from the same word “naruw’an” from the indigenous Taiwanese Ami language meaning “Welcome [for] we are all in the same family.” Similarly, to live up to its name, Naruwan Taiko’s mission as a performance group is to welcome people of all ages and all levels to join (not just limited to the Taiwanese or Japanese community) and to learn the style of Japanese drumming. As a group, Naruwan Taiko hopes to encourage teamwork, creativity, physical activity, and confidence in expression for each individual.

Our organization was founded in the year 2008 and since then we have been part of hundreds of celebrations all across San Diego County in weddings, grand openings, and cultural festivals .

We have all been performing musicians for at least 10 years. This band in particular has performed in gigs all around San Diego, and beyond, for the past two years. Including bars, private events, clubs and coffee shops.

They have played for their elementary school Sandburg elementary as the head liners of the school talent show, they were invited back to do a 5 song set this year at the Multi-cultural Fair evening.  The recently played at Villa Musica’s piano and percussion recital at the closing act and Played a 5 song set for a local spring/easter festival at Christ the Cornerstone church (none of the band are members there but they were seen on FB as a local mira means band).  They are now getting ready for Salk Elementary School’s Earth Day celebration where they will be playing with the likes of Oceanside’s band Caliber!

Highly energetic latin/funk/cumbia reggae band.  They have played at many different venues and fairs/fest over the past couple years. Have played from the Belly Up tavern as opener for Bside to Adams Ave Street fair which is always a huge event

We work out together all the time and have pulled together performances incorporating the fitness format.  U-JAM Fitness® takes you around the world from Bollywood to Hip-Hop with an intense cardio dance workout designed to burn calories, tone your body, and leave you begging for more!

Music experience for over 40+ years with a rented recording studio. Also have been a personal piano tuner for Neil Young.

Funk’s Most Wanted was formed in 2003 by Rulon’ Master Ru” Davis and Clay “Cashmere” Watkins. The band through many a hard moments stayed the course and with hard work became the Number one funk band in the city. this was confirmed by the title of the 2011 Ultimate Music Challenge Champions. These funksters have played with some of the industrys biggest names like The Time, Zapp, Average White Band, Lakeside just to name a few. If you’ re looking for a party this is the band to see.

EraNetik has been performing for over a decade. He dances professionally and is a recording artist who knows how to get the crowd moving. 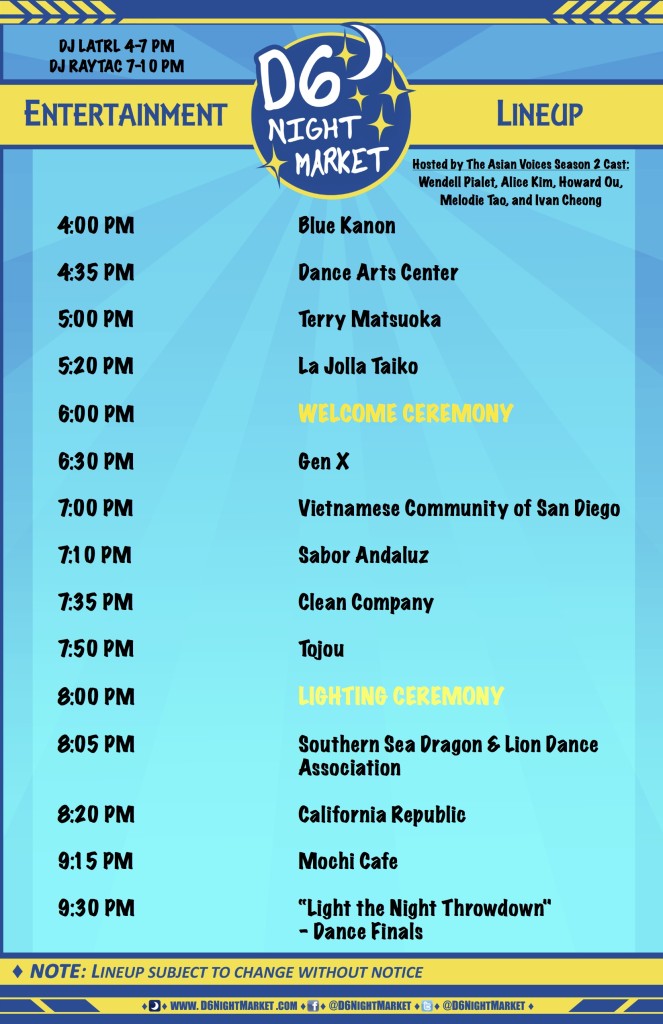 Stay tuned here and to our Facebook at www.facebook.com/d6nightmarket